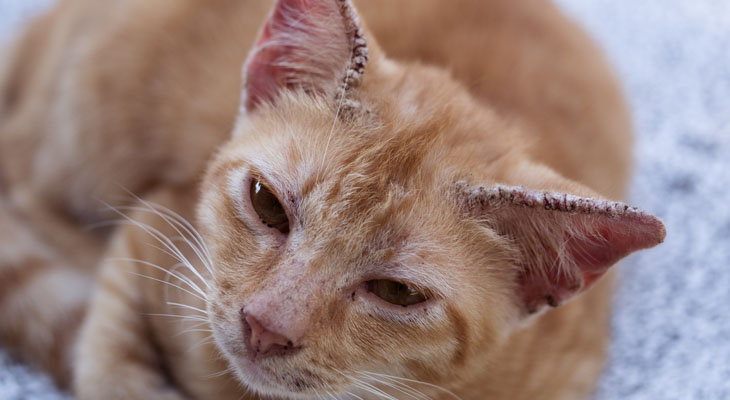 Ringworm is a common skin condition in cats. In spite of its name, this condition is actually caused by a fungus, not a worm. One of the symptoms, though, is a circular rash on the skin that resembles a ring. However, this ring does not always appear.

The fungi that cause ringworm come from the soil, but can easily live in a host. These fungi are known as dermatophytes. Once inside a cat’s body, the fungi digest a protein substance called keratin that is found in nails and hair. They use keratin as fuel to help them reproduce. Over time, the fungi can produce millions of single-celled spores that can grow into new fungi.

When a cat comes into contact with these fungi, it does not always become infected. The fungi may not be able to attach to the skin or may lose out to other microorganisms that are already living there. Even if the fungi are able to stay on the skin, they may not cause any symptoms. However, in some cats, these fungi can result in inflammation of the skin (dermatitis).

Ringworm may clear up on its own, but can take up to a year to go away. During that time, the cat’s fur may fall out in the affected area. This can increase a cat’s chance of developing open wounds in the skin—such as from scratching—and other kinds of infections. Ringworm can also be passed from an infected cat to a person through close contact.

The symptoms of ringworm in cats include:

Diagnosing ringworm involves ruling out other possible skin conditions that can produce similar symptoms, such as an allergy to flea bites. A feline veterinarian may use an ultraviolet (UV) light to look at the cat’s fur. Hairs that are coated with fungus will glow yellow-green under the UV light. These hairs can then be looked at under a microscope to see if spores or other signs of the fungus are present.