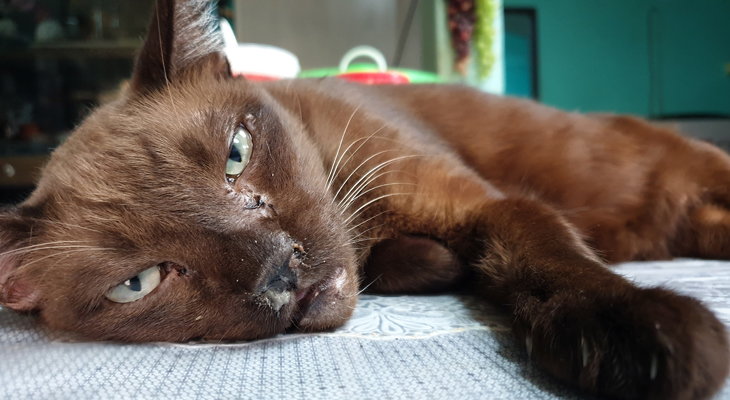 Fungi are spore-generating, parasitic organisms. They are able to survive by taking in food from the hosts on which they grow. Cats can develop fungal infections when fungi spores are ingested, inhaled or enter a cut or wound. Common sources of most fungal infections are soil and bird droppings, making fungal infections a risk for felines who spend time outdoors.

Caused by multiple Aspergillus species, this respiratory infection affects the nasal cavity, lungs and intestines. A cat that is infected with aspergillosis may experience inflammation of the sinuses or esophagus. In some cases, the feline will have inflammation in both the sinuses and esophagus, accompanied by pneumonia.

Treatment may include anti-fungal drugs or surgery, depending on the severity of the disease and the overall health of the cat.

This fungal disease is caused by the fungus Cryptococcus neoformans, and it may too affect the respiratory tract—in particular, the nasal cavity. In addition, cryptococcosis may go a step further and also affect the eyes, central nervous system and skin (especially the face and neck). Found in soil and bird droppings, this disease is the most common among cats and it is transmitted when spores are inhaled or when the fungus enters a wound. Felines with compromised immune systems resulting from retroviruses, such as feline leukemia virus or feline immunodeficiency virus, are more likely to be susceptible. In such instances, cryptococcosis would be a secondary, or associated, infection.

Symptoms vary, depending on which organ or system is affected. The following are symptoms associated with each region of the body.

Treatment may consist of several months of anti-fungal drugs and/or surgery to remove lesions and masses from the nasal cavity as well as lumps from under the skin. In instances where fluid-filled lumps form under the skin, aspiration may be necessary.

Caused by a fungus called Histoplasma capsulatum, histoplasmosis is a fungal infection, which too can be found in soil and bird droppings. Like the other fungal infections mentioned, infection happens when spores are inhaled, making the lungs and the lymph nodes found in the chest the two of the first sites of infection.

When the spores are breathed in, they also penetrate the bloodstream and are then scattered through the body, where they may find harbor in the eyes, intestines, liver, spleen or bone marrow and cause issue there too.

Symptoms vary, depending on the organ(s) and body systems involved, but include:

When the lungs are affected, the infection can clear up on its own. Widespread disease caused by the fungus can be more difficult to treat and may require a variety of treatment options, such as anti-fungal drugs, dietary changes, fluids to address dehydration and blood transfusions.

Sporotrichosis is chronic and sporadic. The organism, Sporothrix schenckii, can be found in soil, timber and vegetation. This fungus is rarely transmitted through inhalation; rather, it typically enters the cat’s body through skin wounds if it comes into contact with soil or a plant that has the spores on it or if the skin is punctured with a sharp object like a branch.

The infection, which is more common in felines than in other species, may remain in one location, often at the point of entry (the skin). However, it may disperse to adjacent lymph nodes. In rare cases, the infection may extend to the bone, liver, lungs, testes, bloodstream, spleen, central nervous system or gastrointestinal tract.

Treatment involves anti-fungal drugs. Pet owners may also be told to adhere to a strict hygiene regimen, because the infection can be passed from cats to humans.

Since there are so many species of fungi, blood and urine samples will be taken and analyzed to determine which species is present. This is the best way to determine which fungal infection a cat has. In addition, fluid, bone marrow and tissue samples may also be taken.

If your cat is exhibiting signs of a fungal infection, call our practice today, so we can help care for your cat.