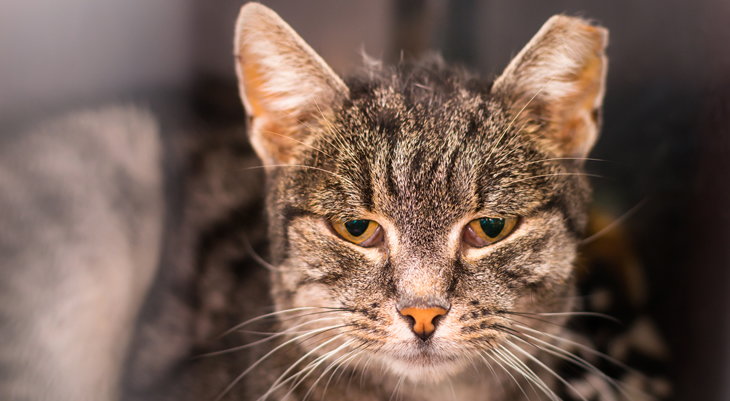 Feline immunodeficiency virus (FIV) is a type of virus that weakens a cat’s immune system and makes it difficult for the cat to fight other infections. This virus affects only felines.

Between 1.5 and 3 percent of healthy cats in the United States are infected with FIV. Cats that roam freely outside have a higher risk of becoming infected through contact with a cat with FIV. This is especially true for aggressive male cats because FIV is most easily passed between cats through biting.

There is little risk of FIV being passed from one cat to another if they live in a household where the cats do not fight. An infected mother, though, can sometimes pass FIV onto her kittens while they are being born or through her milk. Also, FIV does not spread easily during sexual contact between cats.

FIV makes it difficult for a cat’s immune system to protect itself against infections. This is called immune deficiency. These infections include bacteria, other viruses, fungi and small organisms called protozoa. These often do not cause problems in healthy cats, but can severely affect a cat with FIV.

Early symptoms of FIV are similar to other types of infections. These include enlarged lymph nodes and a fever. However, these symptoms may be so mild that they go unnoticed by the cat’s owner.

It can take years after infection with FIV for other symptoms to develop. During that time, a cat can still pass the infection onto another cat, so regular screening and vaccination is important.

Later symptoms are often related to other infections that cats with FIV develop, and include:

The main test used to diagnose FIV in cats is a type of blood test called an antibody test. The body’s immune system produces antibodies in response to an infection. A cat infected with FIV will have antibodies specific for that virus.

The antibody test for FIV can sometimes produce a positive result even a cat is not infected. If your cat tests positive, your veterinarian may confirm the results using a different kind of test.

Kittens can also pick up FIV antibodies from the mother’s milk, even if the kitten does not become infected. Kittens that test positive should be retested several times until they are at least 6 months old.

A negative test usually indicates that a cat is not infected with FIV. However, it takes eight to 12 weeks after infection for enough antibodies to show up in the blood for the test to detect them. If a cat has been recently exposed to or bitten by an FIV-infected cat, a retest should be done later.

During the later stages of FIV infection, a cat’s immune system may also no longer produce enough antibodies for the test to detect them. This will produce an incorrect negative result.

This test involves looking for small pieces of the genetic material of FIV in the blood. This test is sometimes used after an antibody test to confirm that a cat is infected. Although PCR-based tests are generally very sensitive, the current ones for FIV result in many more incorrect positives or negatives.

Protecting Your Cat From FIV

The best way to protect your cat is to keep it away from cats that are or might be infected with FIV. This means keeping it indoors, since bites that happen during cat fights is the main way for FIV to spread from an infected cat to an uninfected one.

If you are adopting another cat, keep it away from your current cats until you are certain that the new cat is free of FIV. If you find out later that one of your cats has FIV, they should all be tested. If keeping the infected cat separate from the others is not possible and the cats do not fight, the risk of the infection being passed is low.

There is a vaccine that can help protect your cat against FIV. However, this vaccine does not protect all cats. That is why it is still important to limit your cat’s exposure to FIV.

There is no treatment for FIV. However, with proper management, you can help your cat remain healthy for many months or years. This mainly involves preventing other kinds of infections and treating conditions related to FIV, such as:

If your cat has FIV or you believe he or she has been exposed to another cat with FIV, contact our office today to schedule an exam.